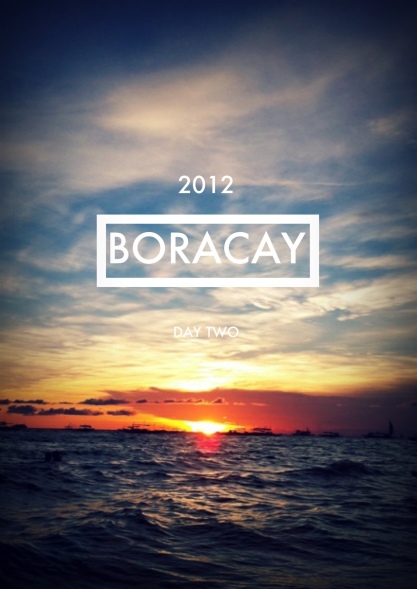 We attempted (and attempted is the key word) to start off day 2 early because a local guide that we met on Day 1 (called Niño) told us that 8.30am was the best time to helmet dive. We kinda woke up at 9am, and hunger brought us to Real Coffee for breakfast at 9.30. Wanted to try the renowned Calamansi muffins, but they were sold out. Ordered a box of 6 (you can’t order less than half a dozen) for collection on the next day. 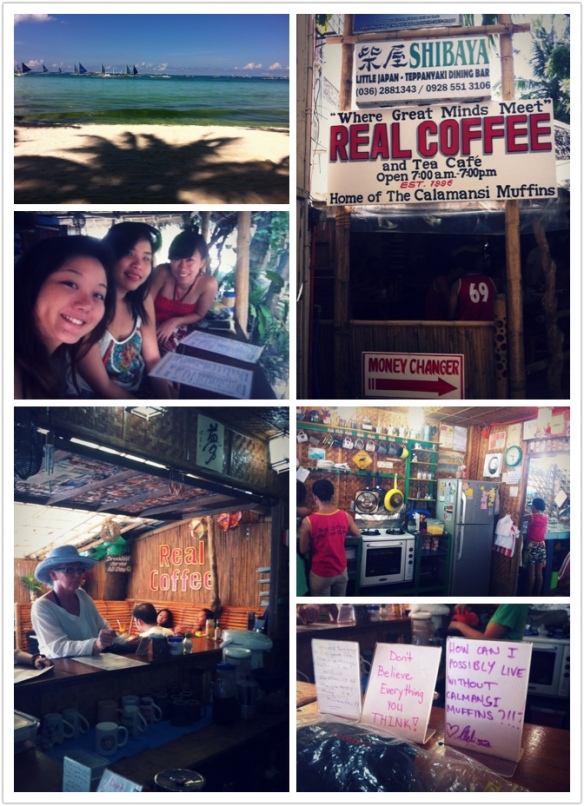 Pancakes were fluffy and huge. My fresh fruit with yoghurt was… healthy. Service wasn’t that good though, they seemed a little flustered and disorganized. 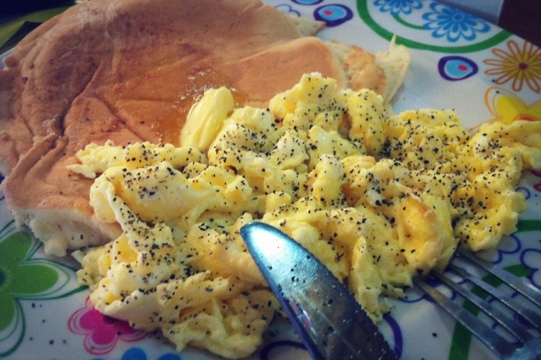 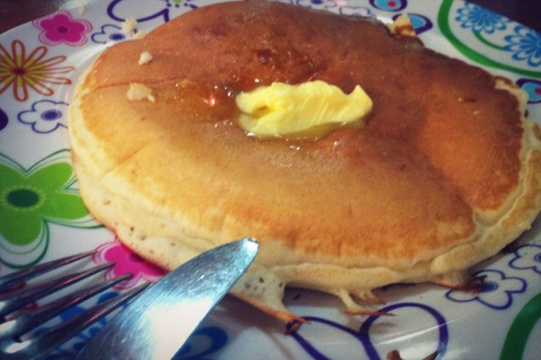 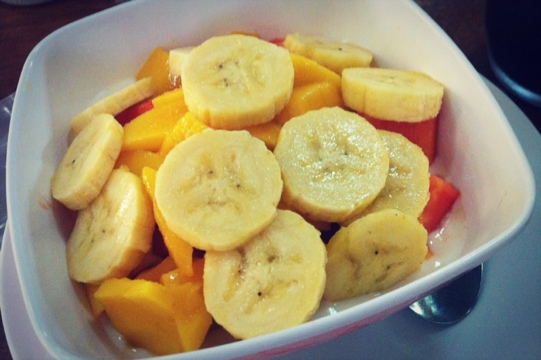 Next, we proceeded to meet Niño along the beach at station 1. We actually met him the day before, while eating some balls at “eat my balls”… his stall’s just beside the balls. He offered us the cheapest rate compared to the other service providers along the beach, so we’d told him we’d return the next day. 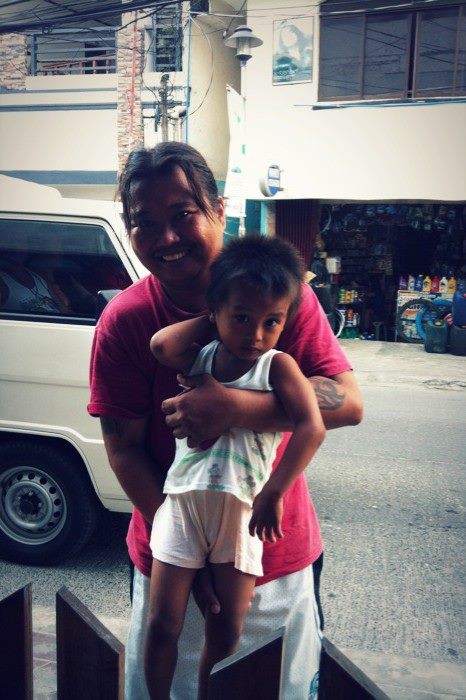 p.s. this is Niño (with his son). He looks like 洪金宝. a bit dark lah but i’m sure you’ll see the resemblance

RIGHT? lol! Look for him if you visit Boracay… he’s really helpful, and offers reasonable rates too.

Took a little boat out to an area in the sea where about there were about 10 floating huts, all providing helmet diving services. For 400php per pax, you could experience helmet diving and have photos and videos taken. After a quick briefing, I was the first to go down… it’s only about 3-4m, but a pretty cool experience since you don’t need to breathe through your mouth or anything; just as per normal, just don’t bend down to let water in. The photographer snapped MANY shots! (albeit quality not so good…) He was like, taking non stop, making us feel awkward, lol. It was cool feeding fishes and seeing them swim right up in front of you. We were down there for about 15 minutes? 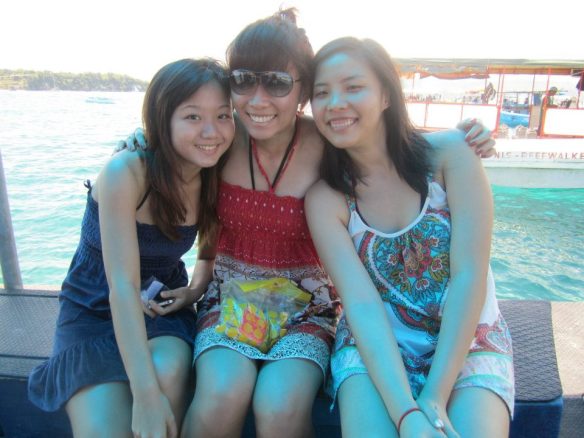 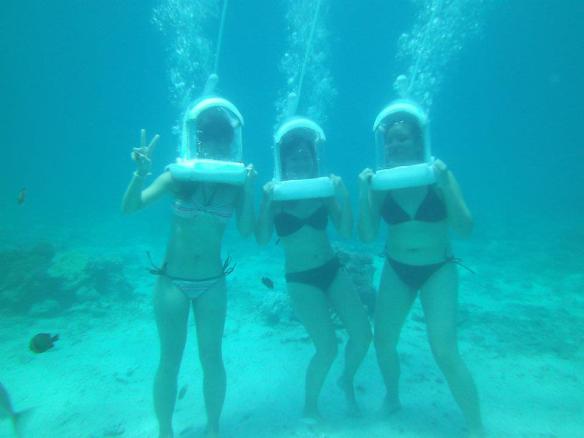 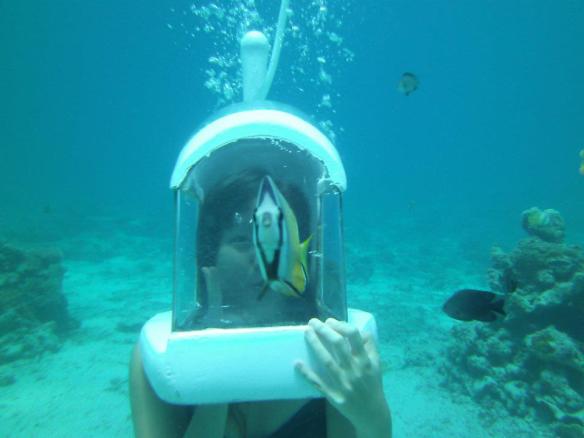 getting photobombed by a fish

Next, we returned to the shore and took a boat out “island hopping”. I had recently been to Phuket and in Thailand, “island hopping” meant we would visit a minimum of about 4 islands… this one only brought us to 2, Crystal Cove and Crocodile Island. Niño mentioned that we had to pay an entrance fee of 200php to Crystal Cove. We asked if it was worth it and he told us that you’d just get to see a nice view of the ocean through a cave… so we decided just to circle it and not hop on. 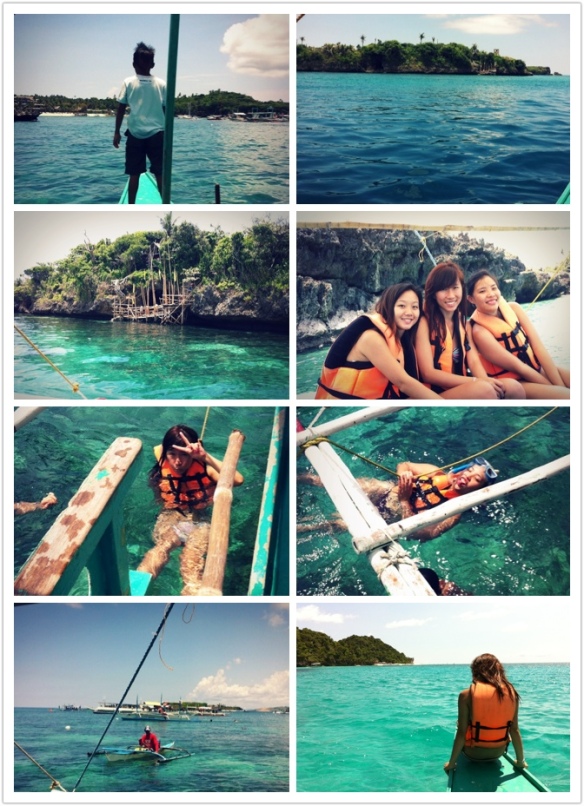 Off we went in a boat that didn’t travel very fast, taking in the sights of the beautiful blue ocean. Our guides were 3 young boys, 2 in their early teens, one early 20s. (Island hopping boat ride – 1300php for 3 of us, included snorkeling gear.) Circled around Crystal Cove and settled in the sea near Crocodile Island for a quick snorkel. It was kinda disappointing, there wasn’t much to see – corals were all dead and there wasn’t a wide variety of fish. Oh well. Highlight of this trip was watching the boys play with each other… it was spontaneous, pure fun… and one of them somehow managed to inflate a pufferfish with air to throw at me. Seriously. There I was swimming back to the boat and I felt like i got hit by something. I turned around to see a pufferfish all puffed up, looking pretty distraught with crazy eyes and its mouth agape. the boy picked it up and threw it a few more times… poor fish fluttered around a lot, hope it didn’t end up dead…

Some tips: bring your own bread, and an underwater camera.

Last stop was Puka Beach. Expected to see a lot of shells, all we saw were broken ones by the seashore. And yeah, some vendors were literally selling sea shells by the sea shore. Wish we had more time at Puka Beach – the sands aren’t as powdery white as those at white beach, but the water was much clearer and you could distinctly see the different hues of blues of the ocean. Puka beach is also much more quiet and serene. Had lunch, and our little guides left us. The littlest one was screaming “no tip” in Tagalog, which someone else only translated like 15 minutes later. We did end up tipping them, although it’s not a custom in the Philippines. 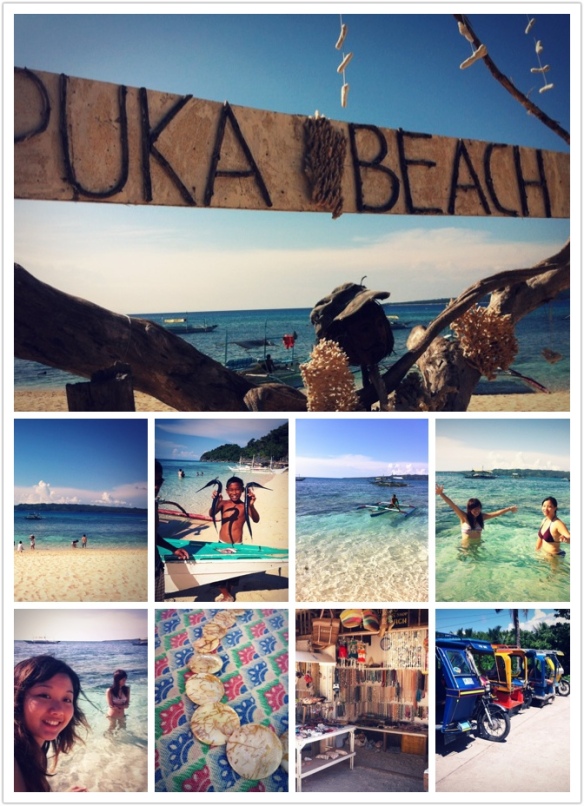 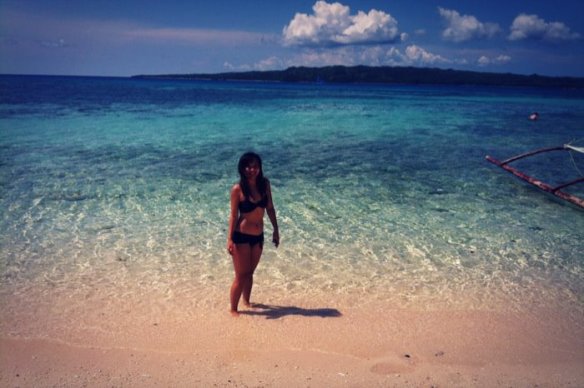 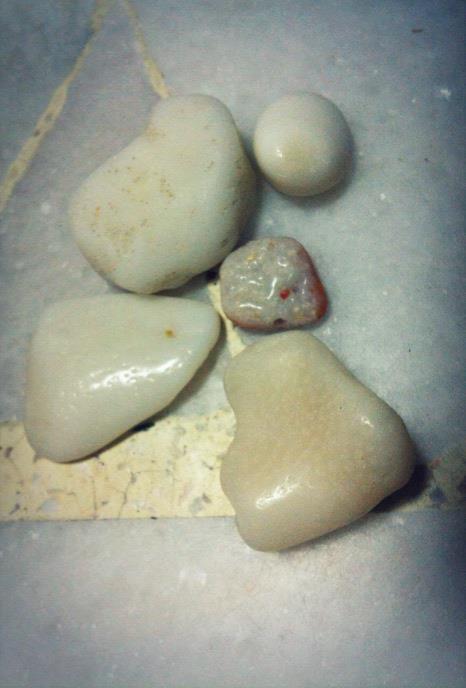 some shell bits we picked 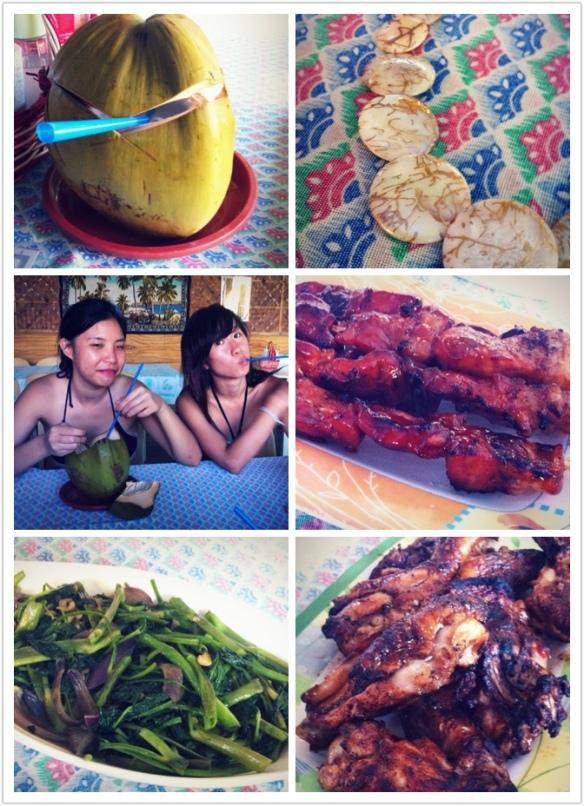 Lunch at an eatery further down Puka Beach

Reason why they left us at Puka and not back at white beach was because we decided to try the zorb, which was located nearer to Puka Beach than White Beach. (300php per pax, if all 3 of us went in together.)
Took a free shuttle there from where we had lunch. At first I thought it was pretty much a waste of money – you paid to get into a ball, to roll down a few meters, and that was it. Didn’t expect to have the most fun I had in Boracay! We went in our bikinis (mistake). Were a mad laughing fit entering the ball. The entire process kinda went like this.

*Us outside the ball, wondering how we would go in*
*Watch, not knowing what to expect, as the attendant throws 2,3 buckets of water into the zorb*
“Head first”, he said, and Nina went first, dolphin diving in.
I went next, following suit.
Before we had a chance to adjust our positions, in came Jean.
And we were a mad slippery mess, trying to make sure our bikinis were staying intact, trying to get ourselves into position (Nina, being the tallest, had to be in the centre.)
At this point, the ball is still stationary. But we still can’t figure where our heads and our limbs should be.
“Feet in front.”
*Scramble to get feet in front*
“Are you ready?” he asks
“NOOOOO”
Not like he cares anyway; he “plugs” the ball by pushing a smaller ball into the entrance hole and filling it with air so that it expanded.
And we were off.
I don’t even know what went on. I just remember a lot of screaming, catching glimpses of the green grass and then some daylight, and water and flesh and then stopping, then adjusting my bikini, then someone shouting “finish”, then trying to locate the exit/entrance hole, then being flipped over again, adjusting my bikini AGAIN, then realizing the exit/entrance hole was behind me, then trying my best to get out (feet first) without another wardrobe malfunction. 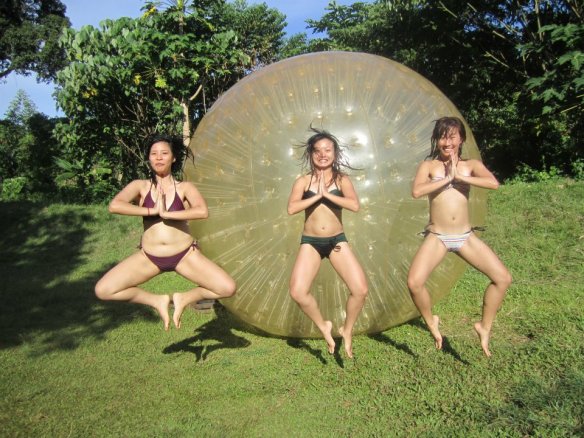 only Nina does yoga. the other 2 of us… we look like zen frogs gone wrong. 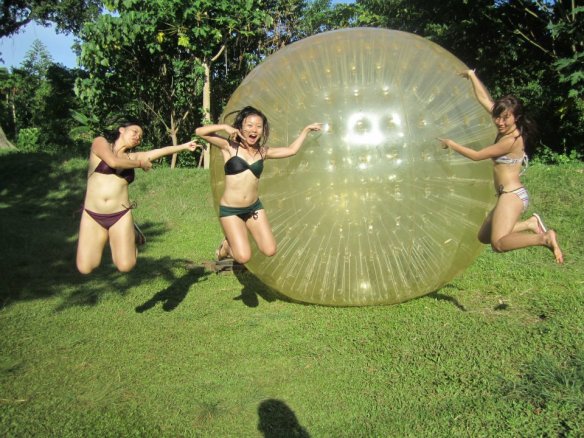 And that was the end of our zorbing experience.

Took the free shuttle back to white beach. Grabbed some fresh fruit shakes before we enjoyed a little nap and sunset by the beach, where Frendz has a designated beach chair area. 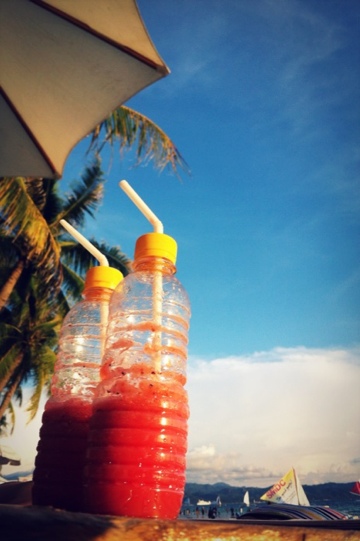 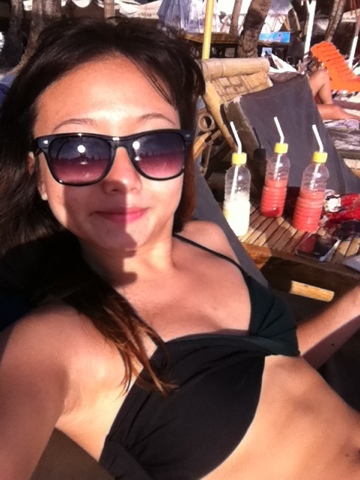 ya, zipai… the other 2… sleeping 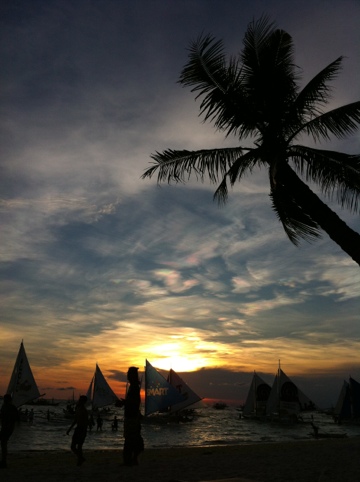 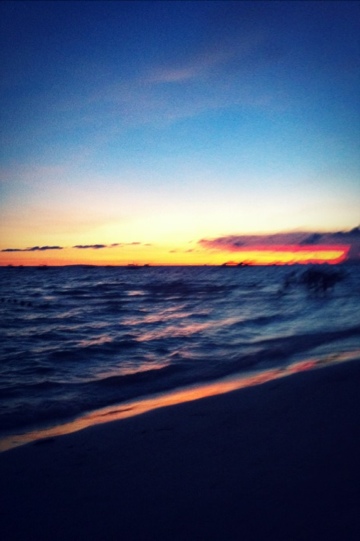 Went for a massage (again), not even worth remembering the name of – it’s beside the entrance of D’mall from the beach… avoid at all costs!! So much worse than our first massage place, for about the same price. The place was a small room, terribly noisy, and the masseuses were talking and singing amongst themselves, sometimes using the adjacent bed as seats (meaning you could feel someone sitting and leaning against your leg). NOT NAISE.

Wanted to have dinner at Andok’s but the queue was too long, settled for dinner at Inasal, famous for their chicken, but we didn’t have any… I forget why. 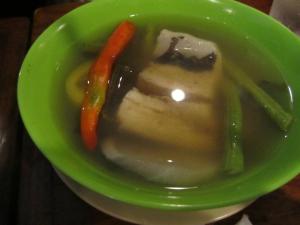 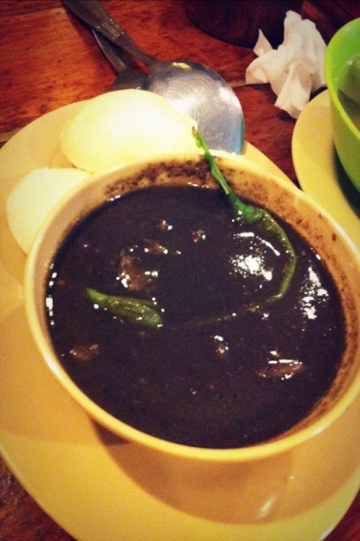 And some dinuguan, which I just realized, is blood soup and Christians should not partake of 😡 but, so yums… 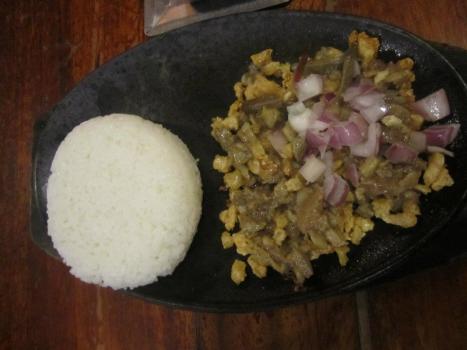 sisig! a lot of lard. Jo says it’s usually made from chopped pig’s head, heart and liver. 😡 but… so yums. 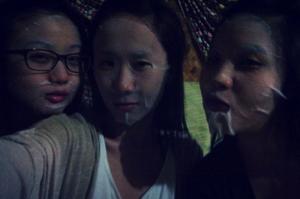 Read about Day 1 here 🙂
and Day 3 here: Jumping 15m, eating balut and getting tattooed!
Meh. I want to go back already.